Why do stinging nettles sting?

Why do stinging nettles sting?

There are actually over 30 species of stinging nettle, with the most common being Urtica dioica, existing throughout the northern hemisphere.

How do stinging nettles sting?

If you look closely, you can see tiny hairs covering each nettle. The long hairs found on stinging nettles are called trichomes. These trichomes are the parts of a stinging nettle that stings you. (1) The stinging structure of the nettle is similar to the hypodermic needle. (2) Each hair is just a single cell that is elongated into a fine point. The walls of this point contain a material that glass is made of, called silica. Therefore, the sting is essentially a tiny glass needle. At the tip of the hair, there is a tiny glass bobble. Below the tiny glass bobble, there is a point of weakness in the cell wall, meaning that when the tip of the hair is touched, the glass bobble breaks off, leaving a sharp edge which can then penetrate skin. The sting is not just due to the fact that the skin is being pierced; it is also due to toxic substances which are present in a swollen sac at the bottom of the hair. It is the injection of these toxins that makes the stinging nettle sting.   The main toxins in this liquid seem to be histamine, serotonin, acetyl choline, and formic acid. This liquid full of toxic substances is under pressure. Therefore, when the top of the hair is knocked off, the toxins are released into the skin. The needle is pushed down as it penetrates the skin, which squeezes the sac at the base of the hair, increasing the pressure of the liquid. This helps to push the liquid up the hair and into the skin. This is similar to pushing down onto the plunger of a syringe (the increase in pressure forces liquid out). (1) 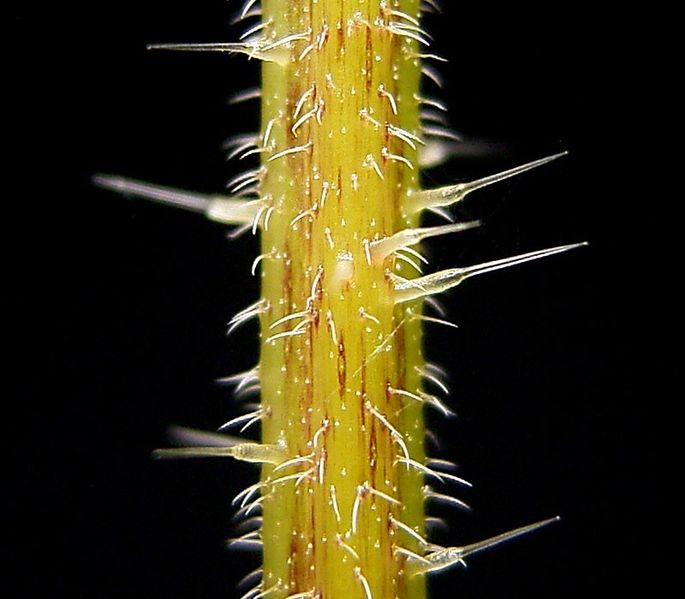 (8)
Little is known regarding the cellular and molecular mechanisms that occur when an organism is stung. It is thought that histamine causes the initial reaction when an organism is stung. However, it is believed that further reactions occur between an organism and the stinging nettles chemicals. It is thought that stinging nettles may contain additional toxic substances that are toxic to the nerves, causing a secondary release of other toxins. (7)

Being able to sting is an effective way for stinging nettles to avoid being eaten. (3)

Information about the toxins in stinging nettles

The toxins trigger the pain receptors in skin, which causes inflammation and irritation. If you are badly stung, the effects can last to up to twelve hours. (1)

So, why can we sometimes pick stinging nettles up without being stung?